I Choose to Believe in Good Things to Come

"In 1815, the Indonesian island of Sumbawa was lush and green with recent rain. Families were preparing for the dry season ahead, as they had every year for generations, cultivating rice paddies in the shadow of a volcano called Tambora.

"On the evening of April 10, the whole mountain exploded. Three fiery plumes shot skyward, merging into one massive blast.

"The eruption of Tambora affected weather in North America through the following year. Spring gave way to snowfall and killing frosts, and 1816 passed into memory as the year without a summer." (Saints)

Now I want to tell you about my own year without a summer. Nine months ago, almost to the hour, I was lying in an ICU bed. During the previous 24 hours, I had suffered the final stroke that was part of what doctors later called a shower of strokes. I had lost many abilities, including being able to walk,  eat, or even really lift my head.

I had been Life Flighted to a different hospital and listened as doctors had explained to my sweet husband that if current treatments did not work, the only option left was brain surgery. This only had two outcomes, further injury or death. As I lay there, I listened to nurses describe my situation. Being a nurse myself, I never thought I would see a patient live through this--let alone live through it myself. I was at a complete loss. I remember closing my eyes thinking, “What next?” in complete despair.

Introduction of Theme: I Choose to Believe

Last November, our family was in St. George spending the Thanksgiving holiday with some extended family. The day before Thanksgiving, I went out on a morning jog on a familiar road close to my mom’s home. I had done this route many times in past visits to town.

I had hit my halfway point and was on my way back when I came to the only stoplight on my jog. The light was red, and I stopped. I pushed the crosswalk button and waited on the corner to cross. I looked over and saw a work truck in the left turn lane, waiting to turn onto the road I was getting ready to cross. He hadn’t moved out into the intersection, and the light had turned yellow.

I looked at him again (sure that he could see me as well), and made sure he wasn’t going to turn onto the road. He wasn’t moving, and the light turned red. The crosswalk sign then flashed green for me to walk, and so I began to cross the road in the painted crosswalk area.

All of a sudden, I see the front bumper of the truck slam into the side of my body, moving me up off the ground. The next thing I remember was being on the ground and trying to get up. After slowly pulling myself up, the driver (who had pulled over to the side of the road) came running over to me (I think I was in shock; I kept asking, "Are my teeth okay?").

Video 2: I Choose to Believe


Sisters in our stake explain why they choose to believe as they go through challenges and trials of life. Video 2 of 2.

Video 1: I Choose to Believe


Members of our stake explain why they choose to believe as they go through challenges and trials of life. Video 1 of 2.

I Choose to Believe in God's Prophets and Restoration

In December of 2011, my former husband went out to replace the brakes on my daughter's car. When he came back in, something in him had changed, and that day began the twelve-month death of our marriage. He had wanted something to listen to while he was doing his project and had searched and found a podcast that promised to "enlighten him about the Mormon church."

Our marriage had always been difficult. He was an addict, and we had spent years and thousands of dollars in counseling. Now his dive into anti-Mormon literature and podcasts became his new and favorite addiction.

He quickly became angry and disrespectful toward Heavenly Father and Christ in our home. He tried to get me to listen with him, but the negativity flowing from those podcasts immediately told me that I wanted nothing to do with them. SO MUCH ANGER. Instead of casting their burdens on the Lord and asking Him for healing, the people on the podcasts were telling the world how they had been wronged and they deserved revenge.

Despite the fact that I had told my ex-husband that I had experienced too many sacred and beautiful experiences with Heavenly Father and I would never turn my back on God, he began trying to corner me and force me to listen to his "new information." What ensued was feelings of confusion, fear, and panic. I felt like I had to hurry and find the truth about what really happened ... what did the Church say about this topic?

I Choose to Believe in the Power of Christ's Atonement

I sat at a lunch recently with some dear friends who shared their discouragement with their college-age daughters’ struggles to find men to date who do not or have not had issues with pornography. They just don't want their daughters to have to deal with that! I am sure we all can relate to deep feelings of concern for how battles with addiction today affect not only now, but the marriages and families of our children and grandchildren.

As I sat at that lunch and in other circumstances where the question, “Can people really change? Truly overcome and begin new?” is wrestled with, I’ve wished I knew how to share my own depth of belief in the power of the Savior’s Atonement to do just that. I’ve felt His power help me move past things in my own life, and have seen it transform the lives of people I dearly love.

I have come to believe that there are many more hopeful stories than we realize sitting all around us, but out of loyalty, self-preservation, and a desire not to have it be the headline of life moving forward, we don’t hear them.

When a single friend of mine moved here from out of state, I asked her if there was anything tough for her about the move to Utah. She said, “I don’t know if people here really believe that the Atonement works. They talk about it, but do they really believe that it can change lives?”

Labels: I Choose to Believe, Women's Conference 2020
We want to thank the many of you who came to women's conference, and the many who helped make it happen! What a sweet experience to be together!⁣ ⁣

We are aware there are sisters who were not able to attend that would enjoy seeing the conference. We were not able to record it in its entirety, but we will share the talks and videos we can. ⁣ ⁣

Enjoy this podcast by our keynote speakers Zach and Krista Horton. They briefly mention being at our women's conference, and then go on to share much of what was in their talk on Saturday. It's wonderful!⁣ ⁣ 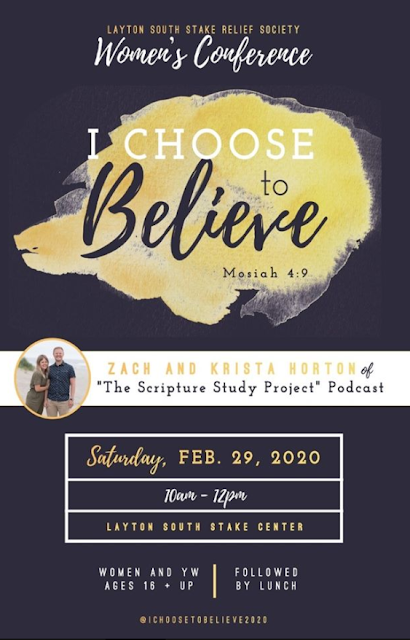 Remember to join us Saturday morning, Feb. 29, at 10 am for stake women's conference! We can't wait to see you there! 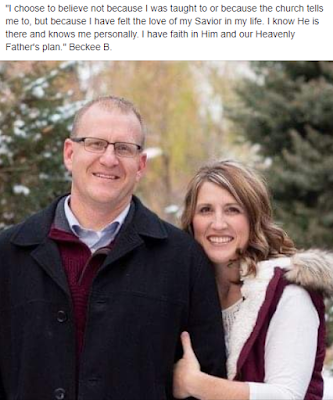 "I choose to believe not because I was taught to or because the church tells me to, but because I have felt the love of my Savior in my life. I know He is there and knows me personally. I have faith in Him and our Heavenly Father's plan." -Beckee B.
No comments:

The Gospel Is My Anchor 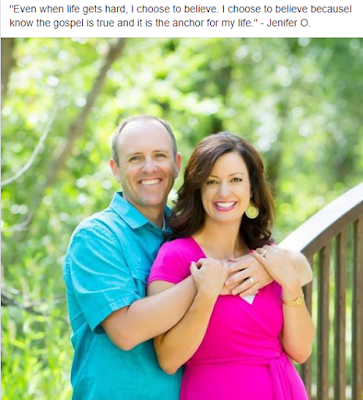 I Believe Through the Dark 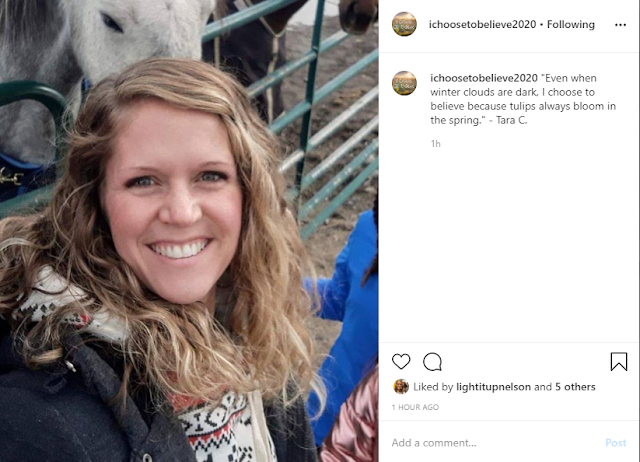 "Even when winter clouds are dark, I choose to believe because tulips always bloom in the spring." -Tara C.
No comments:

I Can Be with My Family Forever 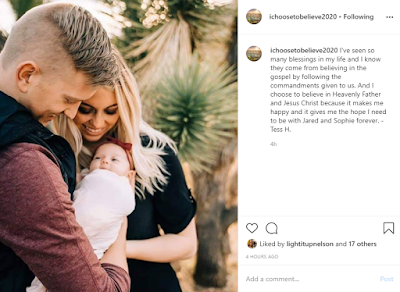 "I've seen so many blessings in my life and I know they come from believing in the gospel by following the commandments given to us. And I choose to believe in Heavenly Father and Jesus Christ because it makes me happy and it gives me the hope I need to be with Jared and Sophie forever." -Tess H.
No comments:

As I Pray, I Feel God's Love 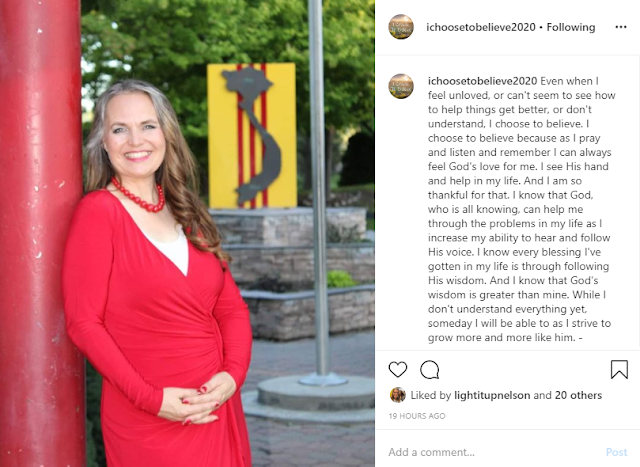 "Even when I feel unloved, or can't seem to see how to help things get better, or don't understand, I choose to believe. I choose to believe because as I pray and listen and remember I can always feel God's love for me. I see His hand and help in my life. And I am so thankful for that. I know that God, who is all knowing, can help me through the problems in my life as I increase my ability to hear and follow His voice. I know every blessing I've gotten in my life is through following His wisdom. And I know that God's wisdom is greater than mine. While I don't understand everything yet, someday I will be able to as I strive to grow more and more like him." -Suzanne W.
No comments:

The Only Way to Be Truly Happy 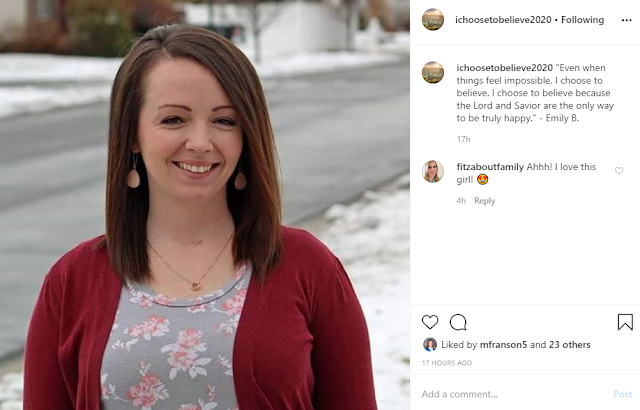 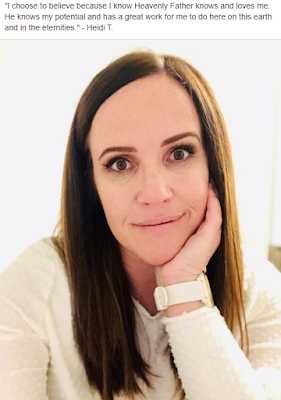 "I choose to believe because I know Heavenly Father knows and loves me. He knows my potential and has a great work for me to do here on this earth and in the eternities." -Heidi T.
No comments: