Labels: adversity, depression, faith, medical issues, stories of faith, unemployment
by Tara Scott
My dear sisters. I have felt that I needed to share some things that have happened in my life in the past year or so. There is so much, that I have had a difficult time trying to figure out which things would be worth sharing, and what the best way would be to share them so that they can be used as a help for others.

In the past few months I had been told that I was losing my job. Another large company took over the one that I have worked at for the past six years. I was told that the other lady would be keeping her job, because she had seniority over me.


It became harder and harder to get up and want to go to work. But I kept telling myself that things were going to be okay.

"Well," I thought to myself, "things will work out," even though we knew that we would be sending a missionary out about August of 2013. The Lord has never let me down before.

I was told that my last day would most likely be in the next 60 to 80 days, depending upon the Hong Kong government, who would give the last approval of the sale of our company. "It's okay, " I thought, "I have some time to get things together and start looking for another job."

Things kept dragging out and the sale didn't happen for quite some time. I kept working as if I still had a job.

There were things that happened in those last months that were very frustrating and hurtful. It was coming to the end of the year, and still I was waiting to hear when my last day would be. It became harder and harder to get up and want to go to work. But I kept telling myself that things were going to be okay.

You would think that when the day finally came, right about Christmas time, I would just be relieved that it finally happened. But, instead, I was feeling frustrated, angry, used and worthless.

I struggled with a little bit of depression. The past year hadn't really gone as planned. One of my children had made some poor choices and was still struggling, my father had passed away, my youngest brother had a seizure and was struggling, and now my job was gone.

I started to pull myself up by the boot straps and told myself that things could be worse. I should be grateful for what I had.

Then.....last week, on December 30th, my husband was asked to help give my brother a blessing, before I took him to the neurologist. I called my mother and told her that since he was not able to drive, due to the seizure, we would swing by and pick him up from work. She was so relieved. She had not been feeling well and wasn't feeling very comfortable going to pick him up.

My husband and I left the house in plenty of time to drive to where he worked to pick him up. We arrived in front of the building and we were waiting to turn left, when we heard it! That sickening sound of metal on metal. Someone had slammed into the back of my husband's pickup truck. We didn't hear any screeching of brakes, really no warning at all. I remember getting out of the truck and yelling....."Are you kidding me?"

That was the last straw. I was so frustrated. I felt that I had been patient. I had taken everything that had happened and tried to think the best. I just couldn't believe that this was happening.

My husband kept putting me back in the truck. He called 911 and checked to see if the other driver was okay. Then he called our daughter, who lived in the area and was an RN. She came quickly to the scene. I broke down and cried. I told her that I couldn't handle anymore. She kept consoling me and telling me that it was going to be okay. 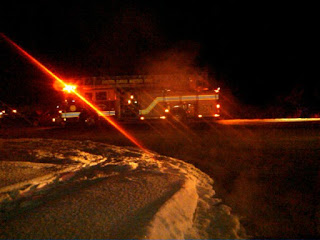 We waited for the fire department and ambulance to arrive. The paramedics wanted me to ride in the ambulance to the hospital to be checked out, but I refused and told them that I would ride with my daughter and both my husband and I would be checked. We watched while our truck was put on a flat bed truck and towed away.

I was pretty badly bruised on my hip, and we were both shaken up but seemed to be okay. As we were waiting in the emergency room, a thought came to me. My mother was supposed to of been the one there, at that specific time and place to pick up my brother. With her being 72 years old, and driving her van, things could have been a lot worse. She has told me since that she feels like I saved her life.

And, because I don't have a job at the moment, I have been able to drive my brother to doctor appointments and to have the tests run that needed to be done.


"Most of us at some time in our lives feel the chill winds of adversity. Storms brew, winds blow, rains fall, floods rise. It may seem that there is no end in sight, that we simply face a future of uncertainty and doubt, trial and tribulation.

"As well as experiencing periodic thunderstorms, we can experience horrific hurricanes and tempests of turmoil, which can destroy our confidence and shake our sense of self-worth. All that we hold dear can suddenly feel so ephemeral, slipping through our fingers. Major life changes can knock us off balance, disrupting our sense of equilibrium."


He also tells of a time when he shared his sad feelings with his son, who told him that he had always felt that "happiness was a choice."

Well, I have decided that I choose to be happy. I choose not to let the adversary get me down.

I am grateful for my Heavenly Father, who has helped me through the past few months and who knows what is best for me. I am very grateful that my mother was not hurt and that I have been able to take the time to help my brother get the help that he needs.

I believe that there are angels beside us, helping us through the tough times. I know that my Father in Heaven has been there, and has answered my prayers, although not always as I have expected.