How Can I Better Trust He Will Deliver Me?

Labels: Cleave Unto Every Good Thing 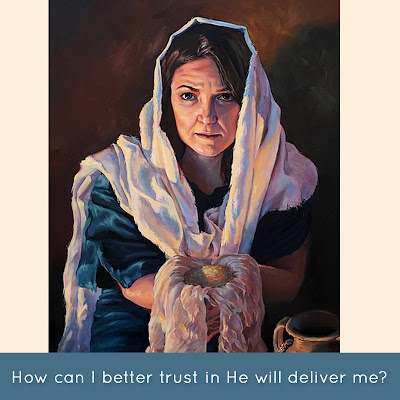 The true measure of sacrifice isn't so much what one gives to sacrifice — but what one sacrifices to give, said Elder Lynn G. Robbins.

"Faith isn't tested so much when the cupboard is full as when it is bare," said Elder Robbins of the Seventy on Saturday afternoon. "In these defining moments, the crisis doesn't change one's character — it reveals it. The crisis is the test."

Elder Robbins...told the Old Testament story of the impoverished widow of Zarephath who followed the prophet Elijah's urgent request for food despite her exhausted provisions. Because she faithfully followed God's prophet, the widow of Zarephath was blessed and her family had plenty to eat during a time of famine.

"Elijah understood the doctrine that blessings come after the trial of our faith," Elder Robbins said. "He wasn't being selfish. As the Lord's servant, Elijah was there to give, not to take."

How can we cleave to the promises God has made, and trust Him to deliver us as we make our sacrifice(s) for Him?