Coming unto the Savior in times of doubt by Ashley Simmons 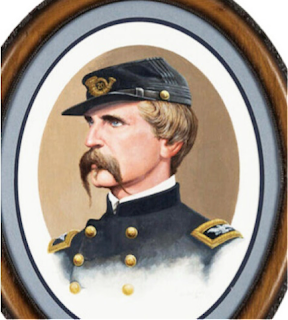 This is a photo of Joshua Chamberlain. He made history in 1862 for his courageous leadership in the battle of Gettysburg. Although from the looks of this photo, it's his mustache that made history. Chamberlain wanted to end slavery so he volunteered to fight in Civil war. His faith and determination shone so brightly in his eyes that he inspired the very best in all around him and was quickly promoted as a General. At a critical point in the war Chamberlain and his troop were assigned to the most isolated and important hilltop in the battle of Gettysburg. Chamberlain was told to hold their ground at all costs. And they did but after two days of determined fighting his troops ran out of ammo and options. They were alone on that hilltop and in a desperate situation. This is when Joshua Chamberlain made history. It would have been very reasonable for them to retreat, in the face of such ridiculous odds and yet they all chose to hold their precious ground. Chamberlain decided to fight with the only weapon they had left- their bayonets (a small sword  that attaches to a musket).  Chamberlain and his men ran downhill with their bayonets toward an enemy that was shooting at them, literally bringing a knife to a gun fight.  Amazingly the confederate army, seeing the resolve of Chamberlains and his men, surrendered. This tipped the momentum of the battle of Gettysburg and ultimately the whole Civil war towards freedom and unity. I wonder if Chamberlain and his troops had any idea that the future of our great nation hung on their defending an unremarkable little plot of ground.

History is filled with extraordinary moments like this where men and women facing terrible odds, reasonable doubt, and justifiable discouragement CHOSE INSTEAD to focus on faith, courage and hope.  These men and women’s faith was so determined that it was reflected in their eyes for all to see.

Sisters each one of us has troops of our own looking into our eyes for faith. Our troops can be anyone we influence, our parents, our siblings, our spouse, friends, colleagues, followers and of course our children and grandchildren. Now obviously we cannot control who sees our faith nor how they react to it, but sisters our faith is NEVER wasted. The ground we defend might seem unimportant to us but could it be that we, like Chamberlain, have no idea of how precious it is?

Today my topic is Coming unto the Savior in times of doubt. Surely we live in the age of doubt, where doubt is not only encouraged but we are consistently told that the doubt we face at times is the most real- authentic part of who we are. We are misled to believe that faith in the face of doubt is somehow inauthentic, or hypocritical. Would we tell Joshua Chamberlain and his troops that their choice of FAITH over doubt at Gettysburg was inauthentic or hypocritical?

I want to share with you briefly two times when I had eyes that were filled with doubt and how coming unto the Savior helped me. 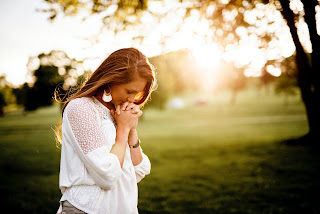 As a young girl it feels like in many ways I was born with a question in my heart ready to be asked.
Specifically ‘how do the daughters of God fit in his kingdom and are we equally valued? ”  As I grew into a teenager, that question got more and more urgent for me to answer and more filled with pain and doubt. I had experiences that added to my doubt.  I tried to resolve these questions by talking to leaders, friends, family and though everyone was helpful and kind, no one could ultimately resolve this issue for me.  I eventually realized that I needed to try asking the source of truth and light- My Father in Heaven. One day I knelt down in prayer and with sobs and frustration I petitioned my God to help me with this doubt. Sisters for reasons I know have nothing to do with my merit, my Father in Heaven graced me with an unforgettable answer that day. Experiences with the Divine aren’t easy to explain but I instantly understood the value and love our Father has for his daughters and it exceeded what my human heart thought possible! What I felt of his love and value for his daughters truly astonished me. I closed the prayer, and opened my eyes and said with a little shock “oh I didn’t know.” The doubt I had wrestled with for years was now replaced with knowledge.

We are members of a church that is founded on personal revelation. Our Savior said in Matthew 7:7 “Ask and it shall be given you; seek and ye shall find; knock and it shall be opened unto you.” Our Father in Heaven is generous and delights to bless us. While I’ve noticed that He doesn’t duplicate others' experiences or bend to our Spiritual expectations, He does give us answers to our prayers, on His time, in His way. I know there are Heavenly answers for every one of our questions.

Fast forward 25 years and serious doubt came back to my vision on a very different topic. I did not go looking for doubt, but it found me just the same. For the first time since my teens I had serious and troubling doubts again. Doubt can be so very painful and feeling ashamed does not help and is not necessary!  Like when I was a teen, I knew that I didn’t want to search public opinion for answers to my doubt-instead I knew I needed personal revelation from my Father in Heaven.  I resolved to listen more closely to the whisperings of the Still Small VOICE at that time then I had at any other time in my life so that I could respond the best way to my doubt. I wanted to take the right path. I prayed many times for help and the answer I received this time was very different then when I was a teen.

One night when I was jogging and pondering my doubt, I had a vivid memory come to my mind.  It was a memory I had almost forgotten, when I was lost as a very young girl at night.  My whole family had been attending a play together and as the play ended a huge crowd started pushing towards the many exits. My mother told all her kids to stay together or you will get lost.  My intent as a young child was to obey her, however little by little, so slowly I didn’t notice, I started following the crowd and not my parents.  The crowd almost always seems to be going the wrong way- and by the time I realized that I was separated from my family, the crowd had guided me to an empty parking lot late at night.  I was lost and afraid and crying.  In dark times there always seems to be a kind soul ready to help. A caring woman walked up to me- knowing that I was lost and bent down and offered me guidance. She told me to remember the last place I saw my parents, saying that if I went back there, I would find them. I listened to her advice and ran back immediately and sure enough- they were there where I saw them last, searching for me, with pain in their eyes. Me being lost caused them as much pain as it caused me.

Remembering that experience as I was jogging that night was an answer to my prayer. I knew I was still that lost girl who needed to follow that guidance again. I needed to have faith and remember back to the last time I felt my Father in Heaven and Savior near. Remembering our spiritual experiences is a willful act of faith. Part of what makes doubt so destructive to our lives, Sisters, is that it can be so very short sighted. No wonder the prophet Helaman said ‘remember, remember’ to his children. I decided that night to have faith and remember.

Many years after my decision to have faith, the circumstances that caused me to doubt changed significantly. When I found out about the change, the first thing I thought of was not my own feelings, but of my troops. I thought of all that occurred in our lives in those years. Births, deaths, weddings, baptisms, good times and bad, I was so grateful that my flawed but sincere faith could be a part of my vision for all of it. I was so grateful that my faith was not on hold until my doubt was resolved.

In these two experiences with doubt, one time I received knowledge from Heaven, the other time, I was instructed to find my faith. Over the years, it has surprised me to realize that Faith has been every bit as powerful in my life as knowledge has. Joshua Chamberlain and his troops' faith shined brightest BECAUSE of the doubt they faced, not despite it. As we patiently come unto the Savior with our doubts large or small, He can turn them into incredible sources of knowledge, power, strength and most importantly FAITH for our lives.

Sisters In the battlefield of life, most of us will face some encounter with doubt but be not afraid, we are daughters of a King, doubt is not our destiny.

In the name of Jesus Christ, Amen.