Labels: adversity, faith, family, miracles, parenthood, stories of faith
by Camille Jaynes
The scriptures are full of examples of miracles. Book of Mormon prophets reminded the people that they themselves had witnessed miracles that should convince them of God's power.

In the New Testament, the apostle John shared his reason for recording many of the Savior's miracles, namely, “that we might believe that Jesus is the Christ.” 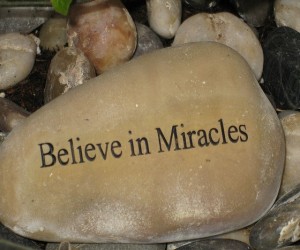 In this dispensation, we witness the great miracle of the Restoration of the gospel of Jesus Christ to the earth. It began when a young boy entered a grove of trees near Palmyra, New York, and poured out his heart and the questions he had to a God he believed could answer him--the God of miracles. And miracles have followed in this dispensation, mighty miracles, including the coming forth of the Book of Mormon, which is itself another testament of Jesus Christ.

Just as important as these mighty miracles are the smaller private miracles that teach each of us to have faith in the Lord. I have learned through many such experiences that the Lord will help us in every aspect of our lives when we are trying to serve him and do his will.

I believe that all of us can bear witness to these small miracles. We know of children who pray for help to find a lost item and find it. We know of friends who pay their tithing with the last of their money and then, through a miracle, find themselves able to pay their tuition, their rent, or somehow obtain food for their family. We can share experiences of prayers that have been answered, priesthood blessings that gave us courage, brought comfort or restored health. These daily miracles acquaint us with the hand of the Lord in our lives.

My mind has been on this topic because of experiences our family has had in past years. My parents have gone through many trials and tribulations throughout their married life. They have constantly been in tune with our Heavenly Father and have prayed for help often. Many miracles have happened. I would like to share a few.


Both of my parents were previously married. And both of them lost their spouses in terrible accidents. My mother was left with a four-month-old baby boy. My father was left with three sons all under the age of six. He lost his wife in August, his father died in November, and the following January his house burned down. Being a new convert to the church, he stayed strong and relied on his faith for comfort. With many prayers and having faith, my parents met and were married. Over a number of years, five more children were added, making a total of six boys and three girls to our family.

Their trials did not cease. One of my older brothers was serving a mission. He was riding a bicycle and was hit by a large truck. He received a horrible skull fracture which left him unconscious for several weeks. Through faith and many prayers he was able to complete his mission.

My youngest brother at the age of five suffered with severe headaches. After seeing several doctors, my parents were told he would be okay and that he was just a growing boy. With many prayers, and not feeling right, they felt like they needed another opinion. They scheduled an appointment with a brain surgeon. After having a CAT scan, it was determined he had a brain tumor. The doctor had been in surgery all day but took the time to check him. There was so much pressure on his brain, the doctor felt he needed to operate immediately. If he did not operate, my brother Chad would not have lived through the night.


We all have difficult battles to fight. It is easy to let fear overtake us. Have courage! Have faith!

I grew up in a small town in Idaho along the Snake River. My brother and I were outside playing when I found some matches left out from the 4th of July. Close by, there was an open motorcycle gas can that was half full. Being a curious four-year-old, I struck a match. It set the gas on fire and exploded, sending flames up the side of our house and down over the top of me.

I cannot begin to imagine those horrible thoughts of fear, heartache, and pain that my parents must have felt as the paramedics took and flew their four-year-old daughter to Seattle, Washington. There was no room in the jet for my parents to go with me.

My parents flew to Seattle the next morning. They met with the doctors and were not given much hope. They were told to make every minute golden for they did not feel that I would make it. After nine weeks passed, and with many prayers and much faith, my parents were told that I would pull through.

Do you believe in miracles in your own life? I hope you do. I know my family does.

In Ether 12:12, it says, “For if there be no faith among the children of men God can do no miracle among them; wherefore, he showed not himself until after their faith.”

We must have faith to have miracles, specifically faith in Jesus Christ. Richard G. Scott of the Quorum of the Twelve Apostles said in a conference talk, “When we seek inspiration to help make decisions, the Lord gives gentle promptings. These require us to think, to exercise faith, to work, to struggle at times, and to act.”

We all have difficult battles to fight. It is easy to let fear overtake us. Have courage! Have faith!

Remember the greatest miracle of all time. The Son of Man rose from the grave. He overcame death and hell! He lives. I know that he lives. Because of this, the greatest of miracles, we have no reason to fear, and we have every reason to have faith.