If We Listen, The Lord Will Tell Us How to Serve

Labels: blessings of service, family, prayer
by Cathy Redford
My mom became a widow at the age of 50 and still had five young children at home between the ages of five and 16. She continued to raise and support those children on her own, and when they were grown, her parents moved in with her and she took care of them until their deaths. She has since remarried, and when her husband’s health started to decline, she moved to Minnesota so that he could spend his last few years with his children. She serves her family, ward, and neighbors in a variety of ways. 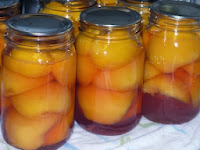 One of the things she misses about the west, besides her family, is bottled peaches. Minnesota does not have the fruit available that we do. This year I felt I didn't have time or energy to can fruit and jam. However, one night the Lord gave me the idea that I should bottle some peaches and drive to Minnesota and visit my mother.

The next morning I woke up, concerned that it was too late to find peaches, and had the inspiration to check Day Farms to see if they had any available. I not only found peaches, but they were on sale for $12 a bushel. Peaches are normally at least $18 a bushel. So basically, I bought two boxes for me and got the third box for my mother free.

My niece, Katie, helped me bottle the peaches. My son, James, blanched the peaches and made peach jam. My husband loaded 32 jars of bottled peaches and some jam into the car and drove them 1300 miles to deliver to my mom and dad. While there, Darrell also swept their garage, cleaned heating vents, rebuilt and reinstalled a kitchen cupboard, and hung two shelves in my mother's sewing room. Needless to say, it was a group effort of service. We were able to visit for almost two weeks and had a wonderful time.

While we were there, we attended church with my parents. It just so happened that the ward missionaries were asked during sacrament meeting to teach Sunday School, because the three teachers who normally taught were not available. One of those missionaries was from here, and his aunt and uncle, Nathan and Ashley, live in my ward.

The lesson was on eternal families, and he bore his testimony on how much he loves his family and how grateful he is for them. I could tell he loves them and misses them very much, but has dedicated this time to serve the Lord. In fact he said that he left his family for two years so that others could be with theirs for eternity.

I was able to take a picture of my husband and me with the missionaries and share his message with his Aunt Ashley when she came to dinner at his mother's house, and she shared the photo and email with his mother. It's so amazing how the Lord knows where each of his children is and what they need.

I felt very strongly that the Lord wanted me to bottle peaches and visit my mother because He wanted her to know that He loves her. It wasn't my idea, and I can't take credit for it. I also believe that if we listen, the Lord will tell us what we can do to help others know that not only do we love them, but that He loves them as well. Not all acts of service require a two-week trip, but I think He knew that was what my mother needed.

It was a wonderful, testimony-building experience for me, and I'm very grateful that I not only had the opportunity, but that the way was provided that I could share in His love for His children.